Island of Elba - the villages close to the campsite

Commune of 11.000 inhabitants, Portoferraio is the "Capital of the island", known as Fabricia during the Roman period and Feraja to medieval times.

Also, relevant antiques of the emperor Napoleon are to be found in the Church of the Reverenda Misericordia. Built in 1677 as an initiative of the homonym Confraternita, the church conserves the bronze mask of Napoleon, realized from Dr. Antonmarchi, personal medical doctor of the emperor in S. Elena, beside the relics of S. Cristino Martire, patron of the city. Roman churches, Fortresses of the Medici family, memories of Napoleon, are all present in Portoferraio, main harbor of this island.

The historical center conserves the taste of a village, frank, colorful, with narrow alleys, old houses and bloomed balconies. Most beautiful is the church of the Santissimo Sacramento, dating back to 1551. From the left part, entering in the church, there is a Votive Temple, dedicated to the Elban Fallen of WW-I. Also the church of San Rocco definitely deserves a visit, together with its cemetery. 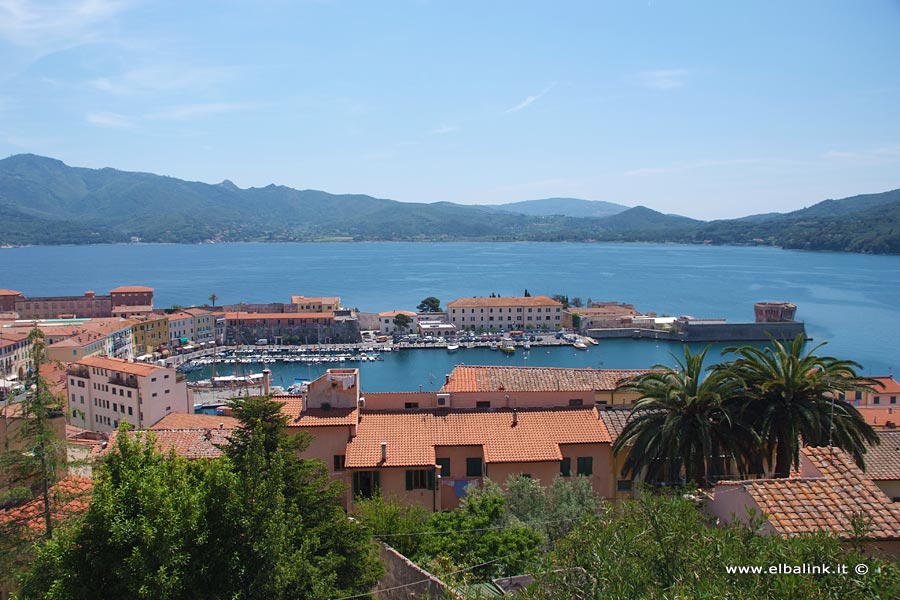 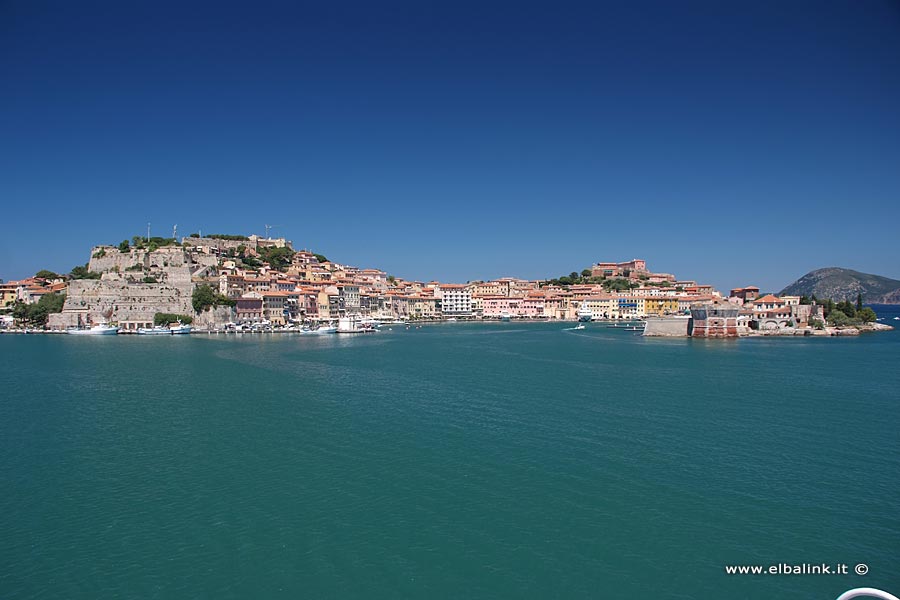 The Portoferraio beaches, with its 24,5 km of coastal development, almost all accessible from the land, offers countless and comfortable possibilities of bathing and strands: at 8 km distance we find the Biodola, second by extension, with its 600 meters of golden and fine sand. This beach can be reached through public transport or by car, even if the parking is not so wide. The neighboring beach of Scaglieri, 150 meters of the most fine sand, delicately declines towards the sea, also reachable by public transport or by car, taking a street on the right, before reaching Biodola. Forno is a small piece of land towards the sea, from which, all along a path over the coast, you can have a pleasant excursion to the tip of the peninsula. To reach Viticcio, at 6 km from Portoferraio, is not so easy, but once you arrive, you will be repaid from a charming panorama and its tranquillity. The dimensions of the Enfola (200 m), even though so tiny, are able to offer various possibilities: the beach is divided on the north part from the isthmus and on the other side, right on the gulf of Viticcio, with a small landing wharf and another strand, reachable only by walk, and leading to the tip of the promontory. The tiny Sansone beach is characterized from white and smooth little stones. From here you can admire one of the most interesting panoramas of the northern coast. Indeed, it's steep coast, and you can reach the beach just by walk.
In order to reach Acquaviva you'll drive on a white road which starts from the strada provinciale heading to Enfola, with gravel bottom, and you arrive in this angle of 80 m of tranquillity and sun. From the beach of Acquaviva, swimming along the coast westwards, you can arrive to the strand of the Sorgente, with high cliffs of white color, and also to Acquavivetta. In Seccione you arrive with a fairy-path: 120 steps in order to reach 180 m of beautiful and calm beach, with gravel strand and 'stains' of sand. A steep stair, and here you have 370 m of smooth pebbles who render the water particularly limpid and the soundings are ideal for underwater excursions: we are here in Capo Bianco, within the marine reserve of Scoglietto, where underwater fishing is prohibited. If you're not keen on wind, then your ideal strand is definitely the Padulella: 170 m of gravel and see-weeds. Between this beach and the Padulella is the Cala dei Frati (Cove of the Friars), characterized from a crystalline sea, and its being often 'desert', being reachable only from the sea.
By walk you can reach Le Viste, close to Medici fortifications. From here, with a small boat, you can reach the island of Scoglietto. Between Forte Stella and the Torre della Linguella, we do find the strand of Grigolo, where we find the seat of the Italian Naval League (Lega Navale Italiana). The beach of Schiopparello is evocative, a thin land-strife which ends up with Magazzini, where you find the Poseidonia Meadows. To end with, the strands of Ottone and Ottonella, circa 800 m long, are covered with gravel and sand; a quiet and protected place.

Commune of 3100 inhabitants, at 15 km from Portoferraio, Porto Azzurro rises in a protected cove of the Gulf of Mola, and has been seat since the antiquity of a natural harbor for the Tirrenian Sea-routes.

The main places to visit are three. Relevant is the Sanctuary of the Madonna di Monserrato, built in the XVII century from the Spanish governor Leon. The image of the Vergine conserved in the Sanctuary, is considered the perfect copy of the one existing in the homonym Sanctuary in Spain.

Also the Fort San Giacomo, seat of a jail, Spanish fortress of the XVII century, definitely deserves a visit , together with the Spanish church with the marble monument of general Diego D'Alarcson. From Porto Azzurro, the excursions to the small lake of Terranera and to Monserrato are also worth to be done. 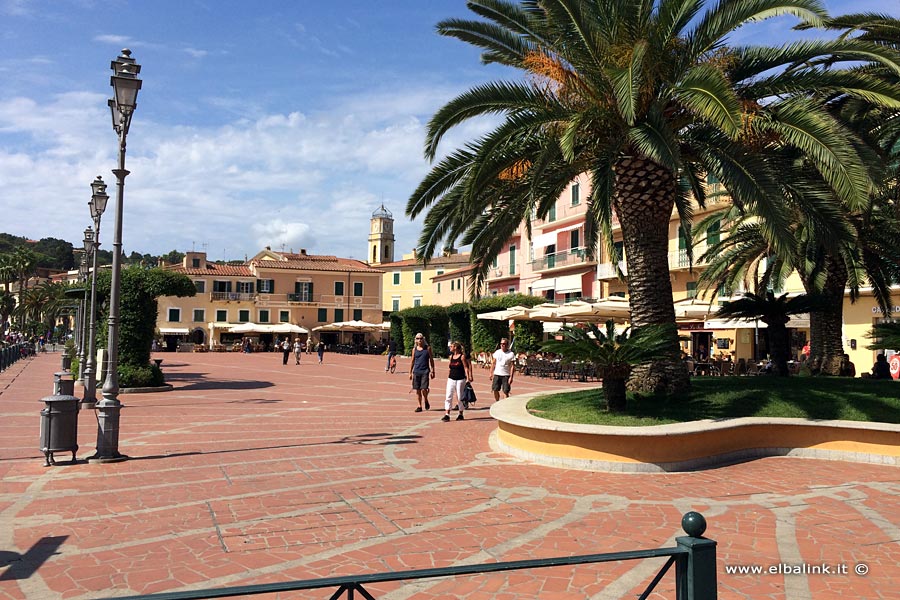 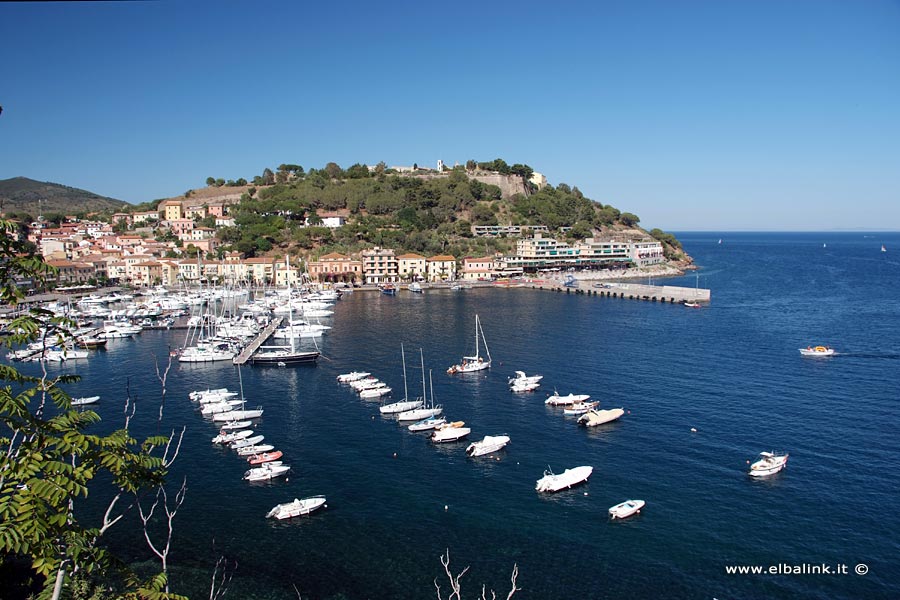 This is the Commune with the shortest coastal development, not more than 5 km. From Reale, exposed to the south and easy reachable, you can swim to the small lake of Terranera. Soft and velvet sand is in Barbarossa, at the feet of the Spanish fortress. The Rossa is small and made of sand, but its tranquillity, at the height of summer, is jolt from small boats. The Rossa represents a curious way to coexist for village-life and sea-life, given the close contact with the village. On the Gulf's side and protected from the wind is Mola: charming by day, and evocative at night

CAPOLIVERI
High on a small hill, Capoliveri is situated in a strategic position, on one side on the gulf of Porto Azzurro, and on the other on the Stella Gulf, with the evocative wiev of the mount Capanne.

Capoliveri was an ancient castle fortified from the Pisans in the twelfth century.
The medieval church of S. Michele, of which there remain only parts of the apse, was a rare example of a purest Pisan architecture.
It is said that Pope Gregorio the XI, in the travel that brought back the papal center from Avignon to Rome, been caught from a storm, landed on Elba and in S. Michele celebrated the Sacred Service.
On the southern declivity of Capoliveri, the Sanctuary delle Grazie is clearly visible.

The center of Capoliveri is characterized from tiny streets called chiassi, scalinate, and from granite arches and small houses with fading colors.

Capoliveri is rather lively in summer, when the small handicraft shops, the wine cellars, the restaurants and bars make its nightlife a colorful event. Among the most relevant festivals/events is the traditional "Innamorata", on the 14th of July. 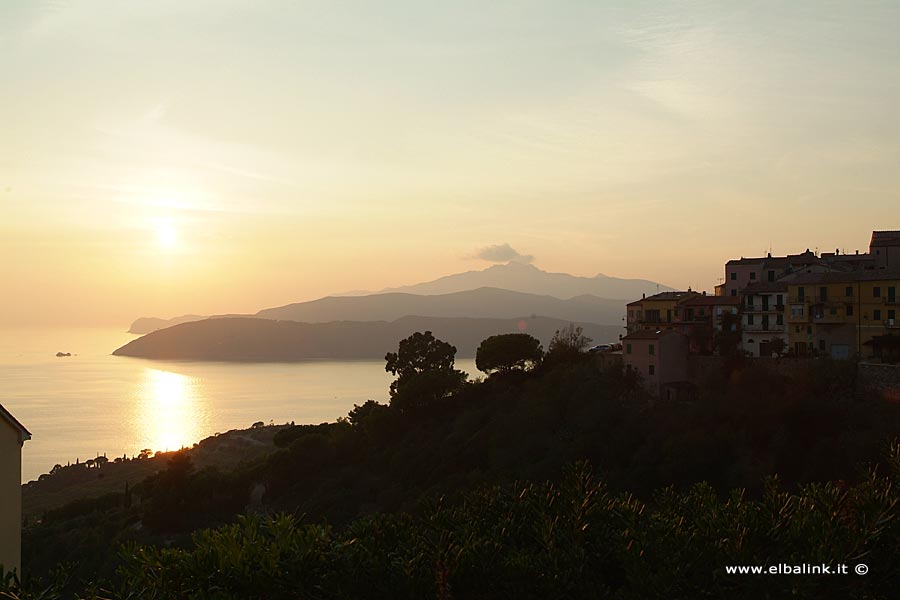 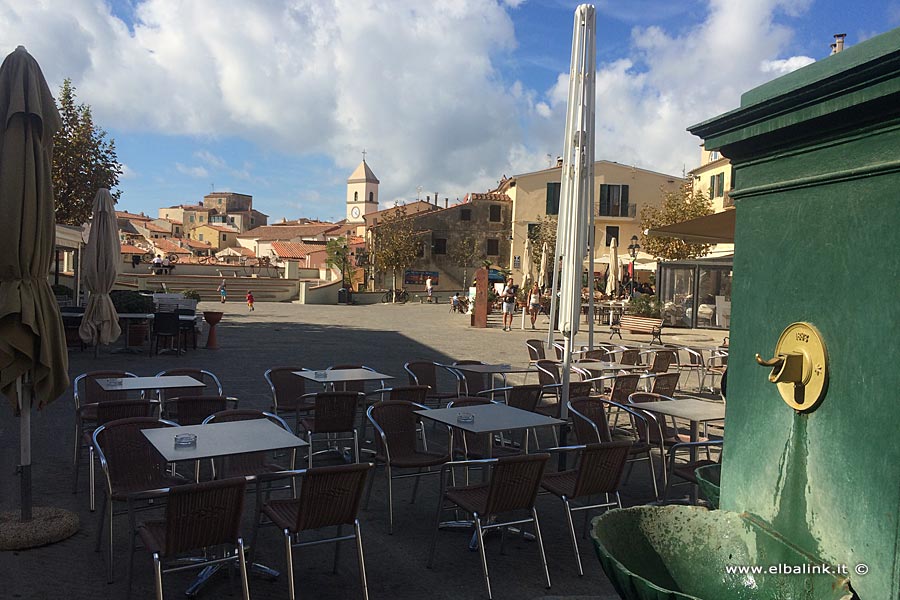 Its coast, 35 km long, is the longest of the whole island. One of the first strands who opened to tourism was Naregno, with a very fine sand extending for 500 meters, rich of tourism-infrastructures. Short after, the small strands of Straccoligno and Calanova. Innammorata is a delicate cove where the crystalline sea reflects in the sky, and where you can easily swim to the Gemeni Islands. Pareti is a small sand strand; Morcone is rich of soft sand; Madonna delle Grazie is very small, with sand and gravel. Also Barabarca is small, with sand and gravel. Zuccale, made of sand, is placed in a most fascinating gorge. The tiny strands of Costa dei Gabbiani are to be reached just from the sea.
Lido di Capoliveri is wide and rich of infrastructures: ideal beach for those who want to be immediately in water. Easy accessibility is granted also to Norsi, a beach of sand and gravel, while Felciaio is a graceful bay of sand, with a natural porticciolo, where quiet and tranquillity are at home. Same characteristics are found in Margidore, with sand and smooth gravel. Lacona, among the most extended, has most fine sand between whose dunes the pancrazio marittimo blooms. Also Laconella is extremely beautiful, with its special rocks.

Visit Le Calanchiole, our other campsite always at Lido di Capoliveri, with a private beach

Made with love by Elbalink